If you're happy to travel

Waitress is also touring to:

Sara Bareilles has written a charming score that suits the quirky material and Mueller's dazzling voice and endearing personality.

Alert me on return

After whipping up a whirlwind of acclaim and box office receipts on the Great White Way, Waitress hits the road on its first ever national tour. Based on a 2007 indie movie, this big hearted musical tells the story of diner waitress named Jenna who's presented with a chance to leave her suffocating small town existence behind, and grabs it with both hands! With a book by Hollywood screenwriter Jessie Nielson (Hope Springs) and insanely catchy score from Grammy nominated pop singer Sara Bareilles, Waitress is a melt-in-your-mouth hit!

Waitress is directed by Tony winner and Boston's ART Artistic Director Diane Paulus (Pippin, Finding Neverland) and choreographed by Lorin Latarro (Waiting for Godot). While the lead role was originated on Broadway by Tony winner Jessie Meuller (Beautiful: The Carole King Musical), Desi Oakley dons the apron for this tour.

WHAT IS WAITRESS ABOUT?

Jenna works as a pie chef in a small town diner. Her time spent baking is a kind of meditation, a break from her mundane existence where her creativity is allowed to flourish. Renowned throughout the town for her crinkly crusts and fluffy pastries, she harbours dreams of opening her own pie shop and making a new life for herself. But when she becomes unexpectedly pregnant by her bullying husband Earl, it seems like she may have to abandon her dreams forever.

Hope is at hand in the form of the town's handsome new doctor, and the announcement of a pie-making competition in a nearby town. The winner of the contest will be awarded a large cash prize, and Jenna realises it may be her one shot at turning her life around.

Waitress was the first Broadway musical in history to have the four major creative roles - book, score, direction & choreography - filled by women.

Two and a half hours with one intermission

You may be required to have had a COVID vaccine in order to attend this performance or show proof of a negative test. Please contact the venue directly for more information on this.

Waitress is making history as the first musical in Broadway to be lead by four women in the top creative slots!

While many Broadway shows sweep you away into far away worlds and mystical settings, Waitress offers a simply charming slice of life from a small town diner with little to nothing going on. 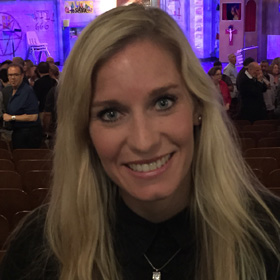 I absolutely loved this show, especially since I saw it when Sara Bareilles... more

This Tony nominated musical (up against Hamilton) showcases what Sara... more

Read all reviews Write a review

Sound good to you? Share this page on social media and let your friends know about Waitress at Youkey Theatre.